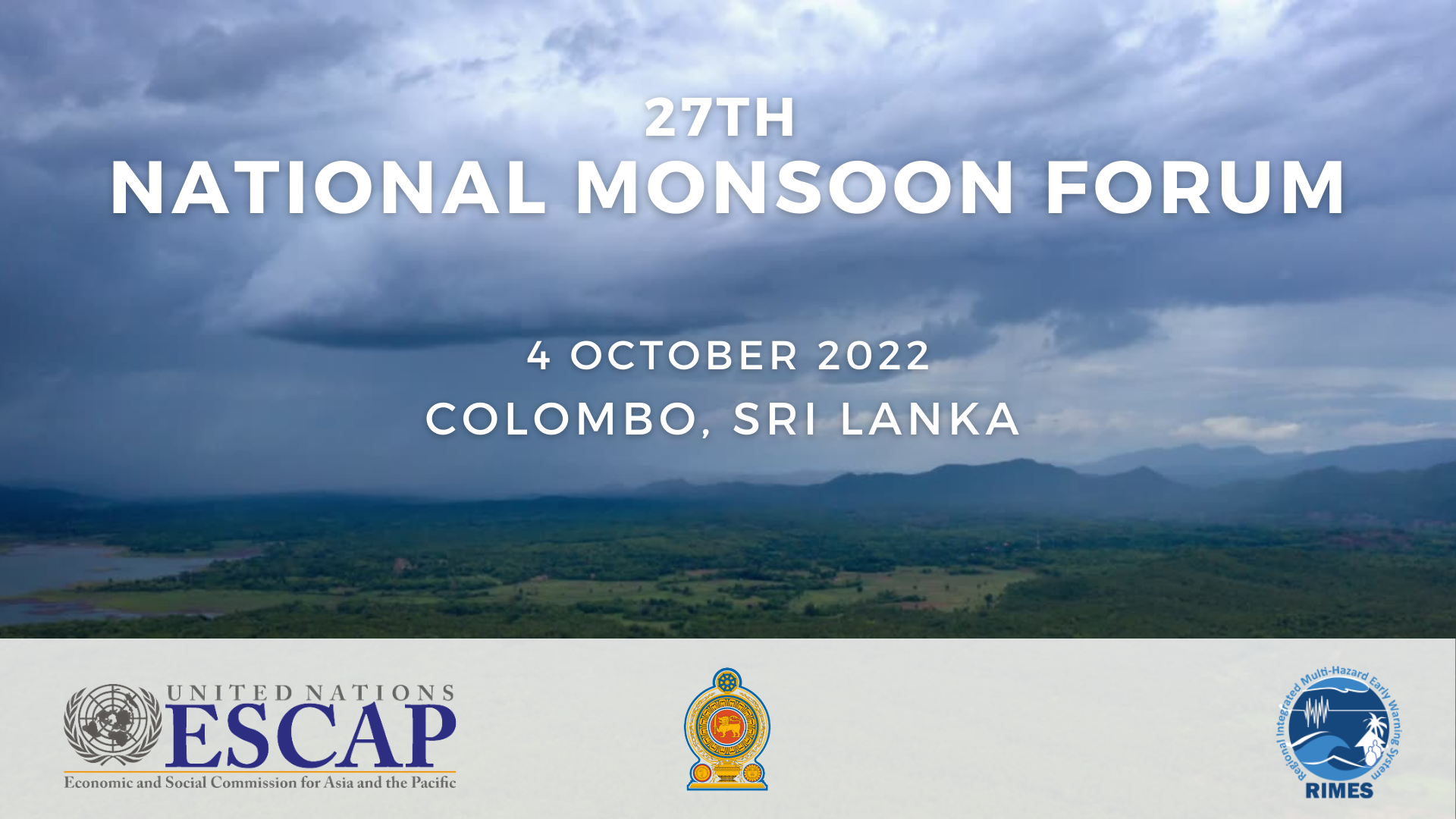 The 27th National Monsoon Forum in Sri Lanka was held virtually in Colombo on Tuesday with an enthusiastic participation of over 70 participants from the Department of Meteorology (DOM), UNESCAP, RIMES and various sectoral agencies.

The Monsoon Forum was hosted by Dr. Shiromani Jayawardene, Director of Weather Forecasting & Decision Support, DOM. In his opening remarks, Mr. Athula Karunanayake, Director General of Meteorology, explained how critical monsoon seasons are, for various sectors in Sri Lanka, contributing much needed rainfall for agriculture (including plantations), water resources, power generation and inland fisheries among others.

“The combined annual contribution of the Second Inter-Monsoon and Northeast Monsoon is about 55% (i.e. 30% from the Second Inter-Monsoon, from October to November; and 25% from the Northeast Monsoon, from December to February), per national average.”, he said, while emphasizing the importance of planning for these seasons. The Monsoon Forum is an important platform for the DOM to better understand and respond to user requirements, and for users in enhancing application of information of various timescales at both institutional and community levels.

Ms. Temily Baker, Program Officer, UNESCAP described various UNESCAP activities on DRR and elaborated on the trust fund that was established following the 2004 Indian Ocean tsunami. She commended the Monsoon Forum for its achievements in cooperation, forming an interactive, cyclical process that fosters a culture of risk informed preparedness, thus paving the way for early warning, early action, and saving lives.

A review of the 2022 Southwest Monsoon Season, by Mr. Meril Mendis, Deputy Director of Weather Forecasting & Disaster Management of DOM covered the extreme weather events, and observed rainfall and temperature patterns over the period of May - September 2022. The review highlighted a reasonable level of comparison between the probabilistic forecasts and the observed forecasts of the Southwest Monsoon Season of 2022.

Stakeholders presented their specific climate and/or hazard-related experiences, from May to September 2022 (monsoon period), and elaborated how forecast products from DOM were (and can be) used in agriculture, water resources, disaster risk reduction and energy management sectors.

In the agriculture sector, for instance, participants explained how observed below normal rainfall during the period of October-November will directly affect the farmers and thus, impact the food security of the country. They said that they plan to save irrigation water as much as possible, and request farmers to strictly follow the irrigation schedules, and try to get the maximum benefits of the rainwater. To conserve water, they proposed to save rainwater and use rainwater harvesting and conservation methods during the season. It was emphasized that short-term forecasts must be delivered to the farmers as much as possible to minimize damages.

The stakeholders also focused on specific good practices, lessons learnt, recommendations for addressing the current gaps in forecast generation, and challenges in climate information application, through their experiences in the monsoon period. For instance, participants strongly suggested using local languages and other means of communication such as WhatsApp and YouTube in the dissemination of forecasts and information, to reach more stakeholders. It was also recommended to improve the reliability of forecasts, especially where the forecast signals are not very strong.

The Seasonal Outlook for the 2022 Second Inter-Monsoon Season and 2022-2023 Northeast Monsoon Season presented by the DOM showed likely below normal rainfall over most parts of the country, except in the Southwestern parts and in Killinochchi and Jaffna Districts where near normal rainfall are likely from October to December 2022. The DOM also highlighted the possibility of low pressure systems, depressions, and cyclones developing in the Bay of Bengal which may enhance the rainfall over the country during the month of December. Based on the seasonal outlook presented by DOM, participants discussed the potential impacts and risks in their sector and planned for appropriate preparedness strategies. Representatives from each sector who participated in the discussions of the forum provided their remarks and spoke about the priority strategies and plans for enhancing sectoral preparedness.

In her closing remarks, Dr. Jayawardene thanked all the presenters for their contributions and the delegates for their active participation. She emphasized that the DOM would endeavor to cater to the various needs of the different user sectors in the country. She also thanked RIMES and UNESCAP for their support in facilitating the forum.

The Department of Meteorology started to convene the Monsoon Forum annually in 2009 and has successfully sustained the conduct of the forum, biannually, since 2015. The monsoon forum process has become a well-established cycle where the DOM discusses its forecasts with institutional end-users for integration in seasonal planning and implementation of anticipatory management strategies for climate sensitive planning and decision-making.

The 27th Monsoon Forum was supported by the Regional Integrated Multi-Hazard Early Warning System (RIMES) through the project “Enhancing weather and climate resilience in RIMES Member States through capacity building on impact forecasting – Phase 2,” funded by the UNESCAP.