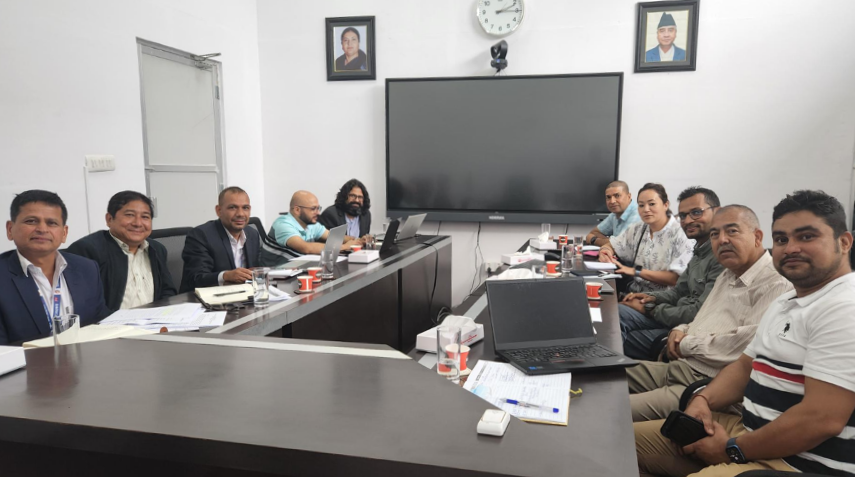 NDRRMA officials with representatives of RIMES and ADPC following the presentation of the Implementation Plan for DSS development.

It is all systems go for the “Development of Nepal's National Disaster Risk Reduction and Management Authority (NDRRMA)'s Decision Support System (DSS) for lmpact-Based Multi-Hazard Early Warning System”. The NDRRMA officially green-lighted it in a letter, issued on July 31, 2022, expressing confirmation of the implementation plan prepared by the Regional Integrated Multi-Hazard Early Warning System (RIMES).

The plan outlines institutional gaps and the approach and methodology that will be adopted in DSS preparation, design, development, deployment, and sustainability efforts.

The DSS for NDRRMA is an automated tool designed to facilitate climate-informed decision-making by generating guiding insights on climate-informed development and growth interventions based on analyses of past, present, and potential or future climate risks and opportunities in key socio-economic areas. For instance, using the system, a 10-day lead time for rainfall, maximum or minimum temperature, wind speed, and humidity, and analysis of risks associated with such forecasts, can be provided to relevant districts, allowing emergency responders to anticipate hazard or disaster scenarios, implement actions for reducing risks, and allocate resources for timely responses to emergency requirements, including rescue efforts if necessary.

In a statement, NDRRMA Joint Secretary Rameshowr Marhatta noted how the proposed system is anticipated to help boost the agency’s work, particularly in hazard and disaster preparedness.

The DSS tailored to the requirements of Nepal’s disaster risk reduction and management sector will be co-produced by RIMES and NDRRMA, along with other relevant sectoral bodies, as part of the World Bank-funded Climate Adaptation and Resilience for South Asia (CARE) Project.

The CARE project aims to contribute to resilience-building in the region through enhanced access to regional data and knowledge; development of climate-smart guidelines, tools, and capacities; and promotion of climate-resilient decisions, policies, and investments across key public sectors in participating countries, namely Bangladesh, Nepal, and Pakistan.